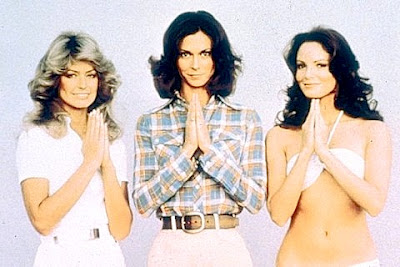 Ayn Rand was well known to be a fan of '70s TV show Charlie's Angels. But what's lesser known was that she approached the show's main attraction, the late Farrah Fawcett Majors, for the role of Dagny Taggart in a proposed mini-series of her novel Atlas Shrugged. Makes a strange kind of sense; Rand had a thing for critically underrated blondes, and the disembodied voice of John Galt finds a distinct echo in the speakerphone commands of the mysterious Charlie. Anyway, one thing's for sure: Farrah would have been a way cooler choice than Angelina Jolie.
Posted by Daniel Barnes at 6:23 PM

Tunku Varadarajan has published an Objectivist-sounding eulogy of Farrah Fawcett on the Forbes.com website:

If I recall correctly, Raquel Welch was also considered for the role at one point.

The best cast was probably the one desired by Al Ruddy when he tried to make the movie back in the early '70s. Fay Dunaway as Dagny, Paul Newman as Rearden, Robert Redford as Galt. All three actors in the prime of their careers.

The celebrity death I'm truly sad about is Billy Mays. That guy was a riot, I'm really going to miss his infomercials.

I made the same connection as you did between Rand's affection for Farah Fawcett and Marilyn Monroe. Thanks for the link to the obit.

Well we're not just Hume, Popper and Santayana all the time around here ...;-)

Glad you saw the same connection.I must say I'm very interested in your forthcoming book, when is the release date?