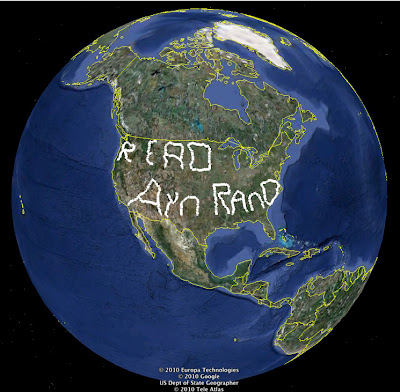 A Rand fan drives 12,328 miles to declare her awesomeness on the face of the earth.
Posted by Daniel Barnes at 3:03 PM

When this news item first appeared a while back, someone commented that a good response would be to add the word "don't" to Canada.

Weather one agrees with the statement or not that you should "Read Rand," or weather you like Rand or not, you got to hand it to her for her dedication. That's something that took a lot of time and effort, and it must have been something she really thought was worthwhile.

Come to think of it, it may not really work, depending on exactly how many people she was hoping would read Rand, as a result, but it should get at least a few people's attention, other the ones on this website.

"That's something that took a lot of time and effort"

True enough, but there are real questions as to whether it was worth the time and effort. In the first place, it is a sheer publicity stunt—nothing more than that. Now Rand was seeking (rightly or wrongly, it hardly matters in this context) to appeal to the "reason" of individuals. How is this publicity stunt appealing to an individual's "reason"? Even if, as I have argued, Rand's "reason" is largely mythical, neither Rand nor her admirers understand this. Would Rand have been comfortable with a publicity stunt like this? I doubt it.

There is something even more perverse about Mr. Newcomen's stunt. Essentially he planned a long and arduous vacation around writing "Ayn Rand." This is not a rational or sensible way of taking a vacation. It's sort of like writing a poem or symphony based on some kind of sterile mathematical formula. On a vacation, your itinerary should be determined by the places you're most interested in going, not by the necessity to "write" letters.

You do have a point there, I wouldn't call it sensible either. By the way, sorry I kept referring to Mr. Newcomen using female pronouns when referring to him. For some reason I thought a women was doing this. I should have read the story a bit more carefully before commenting.

"This is not a rational or sensible way of taking a vacation."

Oh, I don't know. An Objectivist might say that promoting Ayn Rand's ideas is his highest value. What is more rational than using your free time in the service of your highest value?

to Michael Prescott- adding "don't" to the "read Ayn Rand"message would not have been worth the effort. Nobody is reading here anyway. It's hockey season for chrissakes.

What a waste of gas.

Wow. What a freak. Peikoff is the only fool worthy of being the heir to rand's throne. long live the king.