Definitions 2: Doctrine of Concepts as the Principle Unit of Knowledge. This doctrine is expounded in Rand's Epistemological workshops:


Prof F: My question is about the relationships between concepts and propositions. Concepts are logically prior, aren't they?
AR: Yes.
Prof F: If every concept is based upon a definition, isn't that definition itself a proposition?
AR: Oh yes.
Prof F: Well then, the concept is in this case based on a proposition.
AR: No, but the first concepts are not. First level concepts, concepts of perceptual concretes, are held without definitions.... They are held first without definitions, mainly in visual form, or through other sensory images. By the time you accumulate enough of them, you can progress to propositions, to making use of concepts, organizing them into sentences which communicate something. And the concepts you form from then on, which are abstractions from abstractions, those you couldn't hold visually; they require formal definitions. By the time you get to them, you are already capable of forming abstractions.
And observe that that's true even by simple empirical verification: if you see how a child learns to speak, he doesn't start by uttering sentences. He first utters single words, and then after a while, when he has enough of them, he begins to try to communicate in sentences....
Prof B: It is still true that every concept is prior to any proposition that contains the concept. You have to have the concept before you can use it in a proposition....
Prof F: Yes.
AR: There is something I would like to add. There is a passage in the book where I said every concept stands for a number of implicit propositions. And even so, chronologically we have to acquire concepts first, and then we begin to learn propositions. Logically implicit in a concept is a proposition, only a child couldn't possibly think of it. He doesn't have the means yet to say, "By the word 'table' I mean such and such a category of existents [with all their characteristics]." [IOTE, 177-178]

Definitions 1: The Doctrine of Immaculate Definitions. For Rand, the basic unit of human knowledge is the concept, which she defined as follows:

A concept is a mental integration of two or more units which are isolated by a process of abstraction and united by a specific definition.


Note the phrase "united by a specific definition." According to Rand, definitions are a necessary component to conceptual knowledge:

Words transform concepts into (mental) entities; definitions provide them with identity. (Words without definitions are not language but inarticulate sounds.) [IOTE, 11]


Here Rand commits an error that it as the core of her view of definitions. She confuses definitions with meanings. While definitions state the meaning of words, they are not identical with that meaning. They cannot be identical because, as even Rand admits, definitions are condensations of knowledge. The meaning of most words is far too complex to be summed up in a brief definition. That is one reason why it is possible to know the meaning of a word without being able to provide its definition. Rand, however, insists that people must be able to define their abstract concepts if their knowledge is to be "valid." She (implicitly) denies that people can know even when they can't define their terms. This view, however, does not accord with experience. A definition merely states the meaning of one word in terms of other words. It's a way of saying the same thing with different words. The ability to define one's terms measures, not knowledge, but verbal fluency. An articulate person can describe the same thing in a variety of different ways, using different terms. That's all a definition is: saying the same thing using different words. The purpose of definitions is to establish common usage in the words people use, so they know what they mean when they write or speak. Definitions connect meanings (i.e., concepts) to words. Definitions have nothing to do with concept formation. Concepts already express meanings: it's a built-in feature. A concept without a meaning would not be a concept. Definitions merely connect concepts to conventions of word usage. For communication purposes, it is useful that we ascribe similar meanings to identical words. Otherwise, we will never understand one another.

When declaring that words "without definitions" are "inarticulate sounds," Rand misses the point. What she should have said is that words without meanings are inarticulate sounds. Words can only be defined in terms of other words. In the end, there must be a meaning separate from the word itself.

Definitions: Introduction. The heart and soul of Rand's Introduction to Objectivism Epistemology is the chapter on definitions. I have already suggested that Rand's view of essence is far more important to her epistemology than her much heralded (by Objectivists) hypothesis of measurement-ommission. The problem of universals can easily be recast as the problem of essences. For Objectivism, essences constitute the essential distinguishing characteristic of a concept's referents, and the "proper" defining characteristic of that concept. I'll get into the details of Rand's view of such arcana as "fundamental characteristic" and "essential characteristics" and a later time. What is important now is to appreciate the importance of essences and definitions to the Objectivist Epistemology. Following Aristotle, Objectivism contends that definitions refer to the essence of a concept. Aristotle considered these essences as metaphysical; Objectivism considers them "epistemological."

Given the intimate relation of essences to definitions, it could easily be contended that Rand's problem of universals is tantamount to the problem of definitions. In any case, that is the practical upshot of the Objectivist Epistemology. The first four chapters of IOTE, which discuss concept formation, are without practical consequence. Concept formation is in fact much more complicated process than Rand's speculative musings about it would suggest; and moreover, as I contended in earlier posts, since so much of the work of concept formation is done by the cognitive unconscious, reading the first four chapters of IOTE will not improve your ability to form concepts. The mind simply does not work as Rand contends. Knowing about measurement-omission and conceptual common denominators is quite irrelevant to forming concepts. Rand's theory of concept formation is mere window dressing. Only when we come to her chapter on definitions (the longest chapter in IOTE) do we find doctrines that have any practical import. It is for this reason that I regard the chapter as constituting the heart and soul of the Objectivist epistemology. Essentially, Rand believes in the doctrine of immaculate definitions. For Rand, "The truth or falsehood of all of man’s conclusions, inferences, thought and knowledge rests on the truth or falsehood of his definitions." This doctrine is not only false, it's exceedingly mischievous and even malicious. If taken to heart, it becomes a solvent which disorganizes the mind and renders rational thought very difficult.

Relation of moral concepts to reality. Rand contended that the failure of "modern" philosophers to solve the "problem" of universals led to a "concerted attack" on man's conceptual faculty. A closer reading, however, suggests that Rand believed that "abstract" concepts constituted the chief problem, rather than just conceptual knowledge in general. In Introduction to Objectivist Epistemology, Rand argued that the formation of concepts refering to "perceptual concretes" is "fairly simple." [21] Only when the "conceptual chain" moves away from these perceptual concretes do problems emerge. In other words, it's not so much a "concerted attack" on man's conceptual faculty that concerns Rand. Despite Hume and Kant, Rand does not contend that people have trouble learning such concepts as fish, banana, or penis. It's the moral concepts that tend to preoccupy Rand. The primary practical raison d'etre of Introduction to Objectivist Epistemology is to demonstrate the connection of Rand's moral concepts to reality. How does it fare in this regard?

Per usual with Rand, not very well. In IOTE, Rand prefers to discuss simple "perceptual concrete" concepts, like table, furniture, desk, man, animal, etc. She says very little about moral concepts. The one exception is the concept justice, which gets an entire paragraph of analysis:

What fact of reality gave rise to the concept “justice”? The fact that man must draw conclusions about the things, people and events around him, i.e., must judge and evaluate them. Is his judgment automatically right? No. What causes his judgment to be wrong? The lack of sufficient evidence, or his evasion of the evidence, or his inclusion of considerations other than the facts of the case. How, then, is he to arrive at the right judgment? By basing it exclusively on the factual evidence and by considering all the relevant evidence available. But isn’t this a description of “objectivity”? Yes, “objective judgment” is one of the wider categories to which the concept “justice” belongs. What distinguishes “justice” from other instances of objective judgment? When one evaluates the nature or actions of inanimate objects, the criterion of judgment is determined by the particular purpose for which one evaluates them. But how does one determine a criterion for evaluating the character and actions of men, in view of the fact that men possess the faculty of volition? What science can provide an objective criterion of evaluation in regard to volitional matters? Ethics. Now, do I need a concept to designate the act of judging a man’s character and/or actions exclusively on the basis of all the factual evidence available, and of evaluating it by means of an objective moral criterion? Yes. That concept is “justice.”

She begins by asking which facts in reality gives rise to the concept justice, and then spends the rest of the paragraph artfully dodging the question. Instead of showing what the concept refers to, she opts instead to explain why human beings need justice, which is a different question altogether. Once again Rand makes big claims, only to let us down. 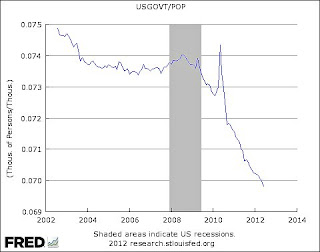 Not. Here's the number of US Government employees per capita in the last decade. The brief spike in 2010 was the temporary census hiring.
Posted by Daniel Barnes at 1:22 PM 11 comments: