The "Conceptual Common Denominator" or "CCD" is surely one of the wooliest terms in the vast sheep station of Objectivist jargon, and is central to Rand's much hyped theory of Concept Formation. However, shorn of its typical verbiage, it merely means something one object has in common with another, or a similarity.

The problem is, of course, that Rand's theory is supposed to solve the age-old problem of universals, or why different things are similar. Her answer appears to be because they have one or more "Conceptual Common Denominators" ie: similarities. So, in classic Randian style, her astonishing answer to the problem of why different things are similar, is...because they have similarities!

William Thomas of The Objectivist Centre is a brave man. Towards the end of this short summary of Rand's theory, he makes a rare effort to actually give some specific examples of Rand's "CCDs." I will leave it to readers to judge the level of profundity the application of Rand's insight to reality reveals. 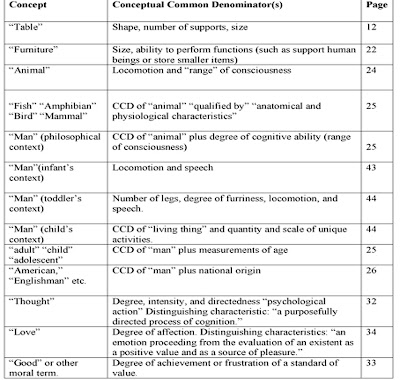 (The page references are from the "Introduction to Objectivist Epistemology")
Posted by Daniel Barnes at 4:21 PM

It’s amazing that at one time this (objectivism) was all so profound to me. Thanks so much for all the posts and all the thoughtful conversation. Keep up the great work.

Thank you very much anon, it's comments like this that make running this site worthwhile.

I know I've said this before, but it's been 40 years since ITOE and I don't think we've moved beyond chairs and tables.

BTW, another piece of Objectivist lingo is the "anti-concept," the meaning of which I've never been quite clear on.

Neil:
>BTW, another piece of Objectivist lingo is the "anti-concept," the meaning of which I've never been quite clear on.

Our team of specially trained ARCHN analysts are on the case...

"Anti-concept" is by its definition itself an anti-concept.

Here is another I've seen a couple of times: "passionate valuer." It may describe any Objectivist.

Also, it is used to describe Rand. Since according to Peikoff the only negative thing you can say about Rand is that she got angry at times, the Objectivist can respond that Rand's anger should be understood in the context of her valuing.

Of course this is about similarity. But as Thomas explains it, her project is to analyze similarity further:

"Rand’s solution is to provide a refinement of the theory of similarity. Baldly,
the idea of similarity is simply that while no existents are identical in all respects, some
things are just plain similar to each other. Without an account of what similarity consists in,
it is not a satisfactory basis for a theory of objectivity. Rand’s refinement is to define similarity in terms of relative quantitative (or in-principle
quantifiable) proximity along some dimension(s). Thus in Rand’s theory, similarity is not
brute or mysterious fact, it is a precise and objective relation among the characteristics of
existents."

I've spent untold hours trying to convert the precise sounding CCD into a computer language for A.I. applications. I stared at her definition of CCD trying to extract every possible meaning. And really when you move beyond tables it leads nowhere. It doesn't even handle tables.

In the end it is profound sounding collection of words that can make the one think that words and concepts are now mathamtically precise. But this really isn't the case. She just means "similarity" as this website points out.

Has anybody heard of Jeff Hawkins and his Numenta company?

He has some TED talks (go to TED website or youtube). His company website 'Numenta' also has white papers and software. He is making real progress in how the brain might detect and predict sensory information.

I highly recommend those interested in how the mind works to check out his ideas. I wonder what Binswanger and other objectivists think of such ideas? My experience in the objectivist movement leads me to beleive they would be highly criticial of such attempts.

what about the phrase "anti life,anti-man,anti-mind,anti-reason,anti-reality" or some equivalent?

Yes, why not? Will give it a crack.