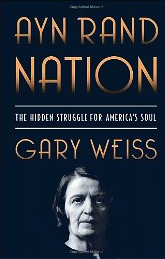 "starting with her infamous writings."

A little over the top, no? I doubt Kirkus would call the writings of Jean-Paul Sartre or Frantz Fanon (to name two leftists of the same era) "infamous."

Neil and Greg - Will the ARCHNBlog also be reviewing this long-awaited treasure of Objectivist thought:

I can't believe Peikoff finished it.

What will happen to Rand's influence when we have to face up to something that extreme individualism cannot handle? Something that such a hypertrophy of individualiam makes worse.

I'm referring to climate change. I think in between ten and twenty years the denialists will be discredited and people will be very pissed off with them for dropping them in the shit. If you have any doubts about the seriousness of the situation don't.It's real and actually probably worse than most of the projections. I've been following the science and modern climate science explains both what is going on now and what happened in the past. The denialists are merely attacking others positions rather than seeking explanations.

The extreme individualism that Objectivism encourages leads to people abandoning intellectual integrity and looking for something, anything that will let them avoid having to come to an accomodation with ideological opponents and taking collective action to mittigate a danger to all.

Most objectivists won't let themselves believe that the free market will lead to anything but optimal outcomes. It's not just climate change. They usually use Austrian economics and this does not take account what happens when management becomes divorced from ownership in corporations.

Greg and Dan run this blog; I just chime in from time to time.

I assume this book will get a lot of attention here. Peikoff has been working on this for years and it is supposed to be his big contribution to Objectivism, along with the induction theory.

I wasn't impressed with the DIM lectures Peikoff gave a few years ago and the ARI made available for free.

I see the book is all of 320 pages. That's not very long if you are trying to explain the relationship of philosophy, history and culture over 2500 years.

It took Toynbee 11 large volumes, but Peikoff is no Toynbee.

Rand's anti-government ideas are gaining traction, for better and worse. But Objectivism itself is not. I think that those supporting some of her agenda are doing so for emotional reasons. OK, she did so too and rationalized. But non objectivists influenced by her are not using her philosophical rationalizations.

We have to look at what her appeal is to non objectivists influenced by her and then evaluate what part is beneficial and what part is the opposite.

I think that if anti-government ideas are gaining traction, this would've happened anyway, even if Rand had never lived. Philosophy doesn't change the course of society and politics, it's rather the other way around: the current vogue in political thinking makes certain philosophies more popular at the time, people are looking where they can find support for their ideas.

And then the book about the DIM hypothesis... I've listened to those DIM lectures some years ago, and they were awfully bad, so I'm curious what Peikoff now has put into that book of his. I can't imagine that it would be any better, as the whole idea of his classification is nonsensical, not to mention the absurd examples he gives in his lectures. But no doubt it'll receive glowing reviews from the usual suspects...

How many non objectivists influenced by her have only read her novels? How many have read her essays as well? Anyone have any idea?

From what I've read of Weiss' interesting book so far, there seems to be a substantial disconnect between being a Rand-fan and an Objectivist. The Tea Party, for example, seems to "blank out" her atheism. Most people carrying John Galt signs have no interest in Rand's or anyone else's epistemology. And the Objectivists, who see the Tea Party as a means to an end, "blank out" the religiosity. More as I progress.

My experience too. I know a fair few Tea Pary sympathizers in the US who are Rand fans but who think Objectivists are cranks.

Rand's anti-government ideas are gaining traction, for better and worse.

What represents is a kind of extreme government minimalism. The so-called tea party is not, except on the fringes, for government minimalism. They merely believe that the government has grown too big, too expensive, too irresponsible, too much of the "nanny-state," and that things can't go on much longer without the whole thing falling apart. They worry that rising taxes, increased regulation, increased use of arbitrary power on behalf left-wing causes, the rationing of medical care, etc. is going to have detrimental effect on their economic and social status. They look to some of Rand's ideas merely as a kind of window dressing to express what they feel. As Georges Sorel noted more than a hundred years ago, people need myths to express their sentiments, their fears, their desires, their interests, etc. The Left has various myths related to socialism, marxism, environmentalism, identity politics, and so on. But the secular right only has Ayn Rand and Atlas Shrugged. There just really isn't anything better for libertarians and economic conservatives.

I should probably wait to read the book, but my fear is that it will be badly written with a force-to-fit narrative.

I should probably wait to read the book, but my fear is that it will be badly written with a force-to-fit narrative.

While the book does have a force-to-fit narrative, it's not badly written; quite the contrary, from what I've read so far, it's well written and contains some decent journalism. The analysis is naive and wrong-headed. Reading it I can see how so much of Rand, when it comes to economic policy and politics, is merely the usual left-wing anti-business slogans turned on their heads.