The Descent Into Pseudoscience: Where's Albert? 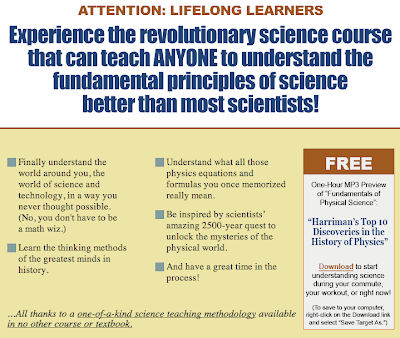 The Ayn Rand Institute's Dave Harriman's "Fundamentals of Physical Science" 120hr DVD course from the Van Damme Academy promises that you will emerge understanding said fundamentals "better than most scientists." Yet nowhere in the lengthy, hypey blurb does Harriman mention quantum physics, or even more incredibly, Albert Einstein. It is well known that the Objectivist orthodoxy consider Einstein and 20thC physics philosophically "corrupt" - and perhaps this explains why the blurb mentions Newton repeatedly, and not much more (other than that well known scientific genius "BUY NOW"). Yet despite their famous incompatibilities, both Einstein's relativity and quantum physics are two of the best empirically tested theories in existence. The ARI's continuing denigration of them marks the Objectivist movement's descent into pseudoscience.

We at the ARCHNblog admit we have not forked out the US$1195 for a program that Van Damme proudly admits is "not professional grade" (one lecture is so inaudible a transcript comes with it) by people who deny two of the greatest scientific achievements of the past century, so we cannot fully attest to its content. However, if you want to get basic Newtonian physics, you might want to take a look at MIT's famous Walter Lewin video course - it's fun, and it's free.

(hat tip to Neil Parille)
Posted by Daniel Barnes at 10:45 AM

Email ThisBlogThis!Share to TwitterShare to FacebookShare to Pinterest
Labels: Pseudoscience

what a shuck.
worse than useless in this format.
Lisa Van Damme should be ashamed of having her name associated with this.
never mind the scientific illiteracy.

Is this for real?? Seriously??