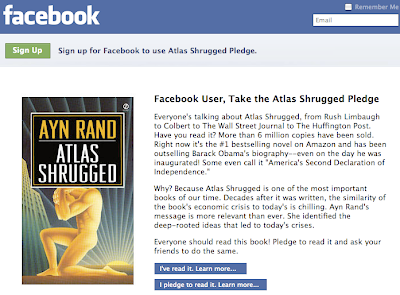 This is the ARI's latest attempt to plug Atlas's (actually largely irrelevant) message into the economic events still unfolding. Interesting because a) it could turn out to be yet another rough measure of how many Objectivists are really out there (who else would put Atlas Shrugged on their homepage) and b) We can see how many pledges Yaron Brook has got so far...;-) Right now, only 12 out of 40 requests...

Posted by Daniel Barnes at 2:44 PM

One thing I did notice is that Yaron is not exactly eager for public to know about his "day job".

Only twelve pledges out of forty requests? Yaron Brook must be very disappointed.

And what exactly is his "day job," that you speak of? Advocating Rands ideas is not exactly something an objectivist would find shameful.

Investment consulting, some of his activities directly contradict what he claims to believe in.

If that's true, than it makes sense as to why he wouldn't like to talk about it. I'm assuming that as an investment consultant, one of the things Mr. Brook tells people how to do is get money from the government that comes from taxes other people have paid on their income. Am I correct on that assumption? That's something that I think objectivists might find objectionable.

Yes, but in a round about way. Yaron does not directly advocate getting the money from the government(as far as I know at this point), but he does invest in businesses that exactly does that.


Actually no, one Objectivist dude I debated awhile back went through total denial even after I provided explicit link.

But he didn't want to debate with me no more after that.

It's #1 in a very specific set of categories of novel now. Fiction>political, philosophy>political, and of course #1 in Rand, Ayn.

I will admit that #144 over is pretty impressive given the number of books out there.